The African spiny horned cucumber (pictured below) is abundant in Southern Africa this farming season. Like other natural crops, it does well in seasons characterized by global warming-induced drought such as the one ravaging Mozambique, Malawi, South Africa, Zambia and Zimbabwe this year. Replaced by the English cucumber, the African cucumber has been completely ignored by policy makers and researchers who have not bothered to find out its properties and potential uses. While in Africa it’s now considered a weed to be destroyed by herbicides, in the USA consumers buy it in supermarkets. 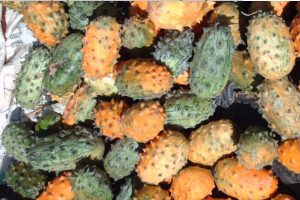 While climate change remains a topical issue in Africa, the majority of organizations are competing in raising awareness of its existence than generating solutions based on full understanding of its root causes. As African countries are restless to industrialize their economies, they are paying a blind eye to the contribution of industrialization to climate change. What has largely been ignored is the opportunity cost of transitioning from ecosystems in which natural forests, human beings, insects and wild animals existed without external forces trying to change the natural ecosystem.

The unfortunate notion of developing an economy is about building physical infrastructure, creating employment at all costs, increasing the Gross National Product (GNP) and the Gross Domestic Product (GDP), export promotion and improving standards of living. But what is the opportunity cost of pursuing  these goals? Infrastructure development focuses on constructing physical structures like roads, railways, high rise buildings, residential areas as well as clearing land for mining and plantations, among others.  How are developing countries replacing natural resources that existed before setting up these structures?

African countries are destroying their natural ecosystems which they are replacing with colonial imported assets. At the end of the day they are crying foul about climate change without trying to find solutions within existing natural ecosystems. More importantly, they are not thinking about using abundant natural food systems to develop their economies. Traditionally, Africans have developed tastes and preferences for foods that grew naturally without destroying local economies and ecosystems. Having destroyed natural forests to produce hybrids and other imported foods in pursuit of industrialization, African countries are now importing inorganic knowledge to replace organic knowledge.  When you destroy natural food systems you also destroy embedded knowledge.

In all sectors, African countries are trying to develop their economies without strategies for replacing natural ecosystems that are destroyed in the process.  Road networks are good but to what extent are they benefitting natural ecosystems?  In most cases, roads are used for exploitative purposes and destroying natural resources. For instance, most big roads going to areas where cocoa, sugar cane, tobacco, tea, cotton and other commodities dominate are mainly for exploiting those crops. Developing countries have not developed roads for business models around natural foods.

The cost of forging alternatives

Opportunity cost refers to the cost in terms of forgoing alternatives. If you clear 10 000 square metres of land for mining and related infrastructure, what strategies are there for re-establishing or re-generating the previous ecosystem?  When you build large dams how are you going to use the large body of water to replace the previous ecosystem? Unfortunately, when large dams are built the main focus shifts to irrigation of monocrops using imported knowledge. In their obsession with economic growth, African countries have not developed pathways of developing or propagating local knowledge in order to increase production and utilization of natural foods.  They have embraced food systems from countries that have done thorough research on their foods which they are bringing to Africa for production in abundance.

To that end, African countries have become a food production zone for countries that have destroyed their natural ecosystems.  For instance, less than 2% of tobacco is smoked in Zimbabwe, with the rest exported.  As the country produces tobacco it is destroying its natural ecosystems, soils and micro climates on which natural foods used to grow.  Honey which used to grow naturally has gone down and we are trying to use scientific methods of keeping bees. We no longer have sufficient bees and it’s not clear to what extent this is affecting pollination on which maize, butternuts, cucumbers, tomatoes and other crops depend.

Developed economies have destroyed their food systems toward satisfying their markets. They are now aggressively expanding their markets to developing countries through replacing or substituting local food systems.  The proliferation of fast food outlets, supermarkets and hotels whose menus constitute less than 5% of local natural foods is an example.  This shows developing countries have become a market for western imported foods through either consuming western food or producing food for western countries.  To strengthen this model, Western countries are selling seed to developing countries so that these countries satisfy western tastes and preferences. Imported seed is coming with knowledge on how to produce food but not how to reproduce seed.  Such vital knowledge remains in the West.

Developing countries competing among themselves

When developing countries produce western food, they compete in exporting to each other. For instance, when Zambia has excess maize it exports to Zimbabwe not to western countries. When you are using foreign knowledge to produce foreign food to earn foreign currency from your neighbor or brother that is not economic growth because it’s just taking from the right hand to feed the left hand. It also increases opportunity costs which negatively affects local food systems. To worsen matters, food research in developing countries continues to follow colonial academic curricular meant to support Western food systems.

As developing countries continue to lack innovation around their food systems, they are producing for Western countries to add value. The best chocolate factories are in Europe although European countries do not produce cocoa. African countries have not invested in developing business models for local natural commodities like wild fruits, African horned cucumber, sweet potatoes and many others. Much of the research has gone into crops like Irish potato which is in the same family as sweet potato.  Tastes for the imported Irish potato seed have been developed mostly in the West where knowledge on producing  diverse finished products is held.

Developed countries have used a market capture strategy through forcing developing countries to export selected commodities to them while also cultivating local markets for foreign food.  Market capture has happened at the following levels:

How much imported knowledge is used to improve local natural ecosystems?

Most African countries have not been able or willing to answer this question. When we destroy and replace our natural resources in a bid to grow our economies using external knowledge, what is the opportunity cost? It is now obvious that we are trading our natural resources and ecosystems with imported knowledge. Where we talk in terms of dollars and cents in relation to a trade balance (exports versus imports), we have a huge knowledge deficit through importing Western knowledge and exporting less. When we import knowledge, it comes through commodities like seed, livestock semen, chemicals and equipment. We spend foreign currency to import external knowledge. How much knowledge are we importing to for improving our natural resources so that we can export natural commodities?

However, all hope is not lost

The following activities form the starting point in the regeneration process:

Creating awareness without providing alternatives is a meaningless effort. At the moment, climate change messages are focusing on telling communities what to do without providing alternative solutions. It’s not enough to discourage communities from cutting down trees when they need to survive.  Let’s ensure they see benefits of natural resources and they can then see reasons for protecting forests. The whole ecosystem can benefit including wild animals like birds.  It’s important to provide climate-mitigation measures that show benefits of preserving natural food systems. Instead of boasting about minerals like gold and platinum, it is better for developing countries to develop and preserve indigenous knowledge on natural resources. Such knowledge can be used to deal with climate change.

All African countries have gone for years importing knowledge such that the graph for Indigenous Knowledge Systems (IKS) needs to be raised. Research on the extent to which imported knowledge has substituted IKS is urgently needed. To what extent is urbanization eroding IKS? As we grow our towns, we are probably destroying IKS. Methods of connecting knowledge systems and promoting co-existence are badly needed. Each community has different knowledge levels with concentration differing with individuals, communities and households as well as tradition or culture.