Whether it is potato production in the highlands of Rwanda, cassava production in Northern Mozambique or sweet potato production in Gokwe South district of Zimbabwe, the marketing season presents the same headaches for farmers. While production is now much easier, profitably moving commodities from farms to markets remains a nightmare that cannot be solved by price information or ICT platforms alone. 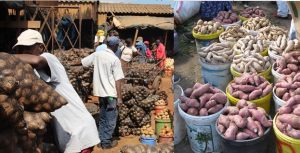 Several visible and invisible costs are incurred by farmers when moving butternuts, potatoes, sweet potatoes and many other commodities from the farm to the market. The following steps reveal the extent to which the movement of agricultural commodities from field to fork does not favor poor farmers:

Depending on distance, the above costs can be highly prohibitive for most farmers who live more than 100 km from the market. In addition to fetching transport, empty bags and strings from the market in the city, farmers are expected to pack commodities according to grades, standards and volumes acceptable to the market. Such knowledge is often missing in farming areas. The farmer should also know how to properly tie up the bag in the way the market expects for long distances or final destination.

Selective treatment of farmers and the power of relationships

The transporter has more confidence in the trader or middlemen than the farmer because he deals with traders regularly, thus the transporter often takes advantage of farmers by over-charging especially where the relationship is only once-off.  Transport hired by the farmer tends to be more expensive than if hire by the trader or middlemen. A major reason is that middlemen or traders are good negotiators who have also built good relationships with transporters, among other actors. They also know distances to most production zones while farmers do not have such knowledge and that comprises farmers’ pricing and negotiating power. Farmers are also often asked to pay cash upfront to the transporter before the commodity leaves the farm.

On the other hand, the trader pays after selling. In fact, when the traders goes to buy commodities on-farm, he summons the transporter to come once the consignment is ready.   Transporters also tend to over-price in order to justify or hide behind cost of vehicle maintenance. Most of the transport is highly localized in cities and cannot go outside as the owner wants to monitor it and also prefer local roads so that vehicle maintenance is kept to a minimum. Rural roads are very bad such that they increase wear and tear. To justify these challenges, the few transporters willing to go to rural areas tend to over-price farmers with the costs being passed over to the consumer.

While farmers may not be sure about different commodity grades and quality specifications in the market, traders often have such details on their finger-tips. Absence of knowledge about grades and standards makes it difficult for famers to negotiate the cost of transport because low grade and high grade commodities use the same amount of fuel on the road. Another challenge is that the farmer has no guarantee of getting selling space and if s/he finds the market full s/he is forced to off-load in order to sell the following day. Off-loaders at the market also tend to over-charge farmers than traders with whom they have a long-term relationship.  As if that is not enough, most first-time farmers in the market do not know customers so their commodities sell slowly unless they hire a sales assistant. Farmers coming to the market for the first time also do not know where to get health food and water so they end up buying expensive food where as traders get food from caterers on loan and pay end of day or after some days.

Both formal and informal systems of marketing agricultural commodities in African countries favor traders and a few farmers who are always in the market building relationships with transporters, food caterers and every actor. Marketing costs are so random that there is often no clear basis for charging. For instance, security people in the market have their own criteria for charging fees. It is very easy for farmers to throw away a lot of money in the process. When selling is not completed, marketing can continue to the following day and this means the entire process can take more than three days. Strangely, most farmers want to complete the sale within a day. They lack patience to sell a commodity that will have taken at least three months to grow.

Middlemen or traders do not make money on fair pricing but it is the farmer who has to adjust the price downwards. Unfortunately, the farmer cannot succeed in persuading input providers to reduce the cost of inputs. In any case, the farmer will have bought inputs before producing commodities and cannot go back to negotiate with input providers for a reimbursement. Meanwhile, African governments remain stuck with marketing institutions that have become irrelevant to the new dynamic context. If you hear the so-called Agricultural Marketing Authorities advertising their activities you would think they have solutions for most of these challenges that have been confronting farmers for decades yet those institutions are only interested in levying value chain actors including the poorest of the poor.

The majority of smallholder farmers cannot produce enough surplus that can be profitably taken to distant markets in the city. This is where aggregators become very important. In the absence of an aggregator or efficient transport system, farmers in distant areas end up selling locally at a loss or resort to barter trade. All farmers want to sell on time in order to get into production cycles of other commodities. Since traders/buyers do not often come on time, farmers end up taking lower prices in order to run with the next production cycle but they will be under-cutting themselves.