Every time farmers inquire about prices of commodities in the market they are often looking for the highest price. However, unless there are serious shortages, in both formal and informal markets, it is rare for farmers or suppliers to sell the entire consignment at the top price. In almost all agricultural commodities sold either through auction systems, open markets and formal institutional markets like retailers, 50% of commodities may fetch the top price, 25% the medium price and 25% the bottom price. In all developing countries, very few farmers are aware of these invisible market dynamics. 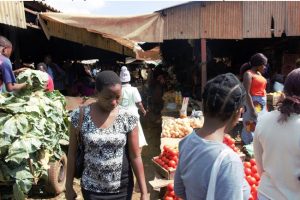 As the process in which commodities become less or smaller, shrinkage of commodities is a major reason for different price ranges irrespective of grades and quality. Shrinkage is the main reason why traders who frequent farming communities buying commodities vigorously negotiate for lower prices on-farm because they have an idea of shrinkage levels that happen from field to fork. Depending on commodity, shrinkage can constitute more than two percent of the commodity volume and value.  Some of the shrinkage is theft-related in the selling process and during overnight security, especially in the informal market. During selling, miscounting contributes to shrinkage. For instance a farmer can mistakenly pack 24 heads of cabbage in a customer’s sack instead of 20 heads or 125 cobs instead of 120 cobs. This is very common because the marketing process is very fast and prone to errors that eat into a farmer’s profitability.

Some of the shrinkage is related to product replacement to customers. For instance when a customer sees that a cabbage she has bought from the farmer has defects, the farmer has to replace with a good one. In Zimbabwe, a cabbage variety called Star 3301 has been notorious for breakages which has caused farmers to lose through replacements in the market. Unfortunately, seed breeders do not breed for some of these market-related factors but focus on breeding for high yields.  They also often don’t even breed for taste.

In the retail trade, shrinkage is a euphemism for shoplifting. In African food markets, commodities mostly affected by replacement shrinkage and theft-related shrinkage include cabbage, green mealies, water melon, leafy vegetables and butternuts. The same applies to potatoes whose pockets are easily stolen either in transit or in the market during over – night storage.  As a challenge, shrinkage happens across all markets including formal and informal. In formal markets like supermarkets and food chain stores, shrinkage is often in the form of slow turn-around and slow selling which reduces quality and freshness such that some commodities become unsaleable.

In the past few years, African farmers have started complaining against an unfortunate reluctance by formal markets like supermarkets to pay for what is not sold which they consider returns to the supplier. On the other hand, informal markets do not have returns policies but thrive on relationships which ensure everything is sold and in most cases, traders are willing to take the bulk of the risk. Although shrinkage is worse in perishable commodities, it is also prevalent in dry crops like pulses where, besides theft, reassessment leads to some form of shrinkage. Where a trader buys soya bean or groundnuts from farmers for supplying to formal companies like processors, the processor may want to reassess quality and quantity, leading to renegotiation of the final price downwards to the trader’s disadvantage. Strangely, the processing company will not pass on the benefits of reduced prices to consumers.

Identity theft in the market

Identity theft is common in both formal and informal food markets. For instance, due to the nature of potatoes, more than 90% of potato farmers are not willing to participate directly in the market. In the majority of markets, the potato value chain has established channels of selling through the trader who has space in the market for stocking the commodity and has a way of dealing with theft in the market. Since farmers are often in and out of markets depending on commodity production cycles, they do not have  permanent stalls for stacking potatoes. As a result, once the farmer has sold the potato to the trader on-farm, the commodity can no longer be identified with the farmer or source. It now assumes the trader’s identity. In the eyes of the consumer, the farmer becomes invisible because s/he is not available to interface with consumers.

At least the informal market tries to preserve the identity of the farmer or source by selling commodities in the original packaging in which the commodities come from the farm into the market. Supermarkets and food chain stores do not sell commodities in the original packaging. They ensure potatoes are first of all cleaned by wholesalers. The farmer sells to a wholesaler who is told by the supermarket to re-package in attractive packaging with labelling showing the identity of the supermarket. The wholesaler is told by the supermarket to pack into 5kg, 10kg and 2kg but mostly in 2kg plastic packaging.

Ultimately the same potatoes from the farmer are sold in a new identity through a different packaging. The supermarket or food chain store does not add much value beyond cleaning or washing and re-packing for distribution in a new identity. The consumer does not see the farmer who is the original producer. This is how branding becomes more powerful than knowledge applied by the farmer to feed the nation. On the other hand, an Iophone or Lenovo laptop is identified with the original inventor even if it seats somewhere in remote villages of Nyeri and Musambakaruma. If food is identity it should be marketed accordingly. Although it is not an illegal practice, companies that stick their logos on unsuspecting farmers’ commodities and market such commodities as if they are the original producers are not different from con men.  In the knowledge economy, the fact that there are no laws against such a practice does not make it ethical and right!