Rural households that receive regular small incomes tend to have a better standard of living than those earning a once-off payment from a single commodity like cotton, cocoa or tobacco. Levels of malnutrition and poverty are often higher among communities that depend on high yielding monocrops than those surviving on diverse agricultural and non-agricultural activities. For ordinary people, fishermen and farmers in developing countries, it is better to earn $100 per month from diverse income streams than earn $12000 once a year from one commodity. They don’t want to be millionaires. 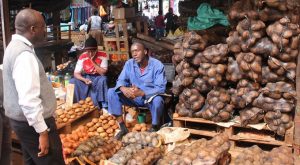 While government policies are promoting high yielding and export crops, the majority of farmers and economic actors are not interested in earning foreign currency but generating and managing their own incomes using local currencies. The idea of a market for ordinary people is certainly different from how government people define a market. Whereas government tries to use price as an incentive for farmers to produce, local economic actors including farmers would rather work with local demand and diversity of commodities which ensure resilient incomes and food systems. These economic actors are shifting from focusing on productivity to incomes, especially in the face of a changing climate where high yielding crop varieties are failing to reach their maximum productivity levels.

Income-focused trends at local level are challenging production-centric policies and strategies being promoted by governments and development agencies. When policy makers begin to focus on improving incomes at the grassroots, they will shift from production-centric infrastructure systems to a market-centric infrastructures that ensure smallholder farmers and other grassroots economic actors have full access to reliable markets. This will certainly inspire a new sense of wealth creation where farmers and rural entrepreneurs do not have to sell their commodities through intermediaries all the time.  In order to understand the new thrust, government will move from only collecting crop production data to collecting income data at local level.  That can reveal gaps between production and income. Yield data is meaningless without income data.

As communities diversify their income sources, indigenous vegetables are finding a space in most African informal markets. However, while policy makers are directing resources at exotic hybrids, the production of indigenous vegetables has remained largely informal. These vegetables are mainly ground growers and therefore exposed to mud and dust. Highly informal production leads to contamination by many impurities including soil that may not be removed adequately in the cleaning process. Harvesting is merely picking with no basis for grading because they are not produced with commercialization in mind.

Indigenous vegetables also go to informal markets where mass consumers do not often emphasize on traceability and quality. After picking there is not much hygiene in the processing stage.  Since the market and consumption has not been formalized there is no feedback to producers. Whereas in the production of exotics like peas there is emphasis on thorough grading, indigenous vegetables whose sizes are bigger than peas should become a commercial crop so that farmers can be educated properly to, for instance, raise the crop and mulch so that there are minimum impurities from the ground.

A unique selling proposition for indigenous vegetables is that they are very easy to commercialize. They grow on their own during the rainy season with no need for irrigation, fertilizer or chemicals. They can be considered authentically organic, the direction in which the world is going.  Some don’t even need seed, for instance, Nyevhe and Mutsine whose seed like dormant in winter and germinate naturally with the first rains. During the dry season, these vegetables ensure consistent incomes for many households.