People who co-exist with Kombi drivers in Zimbabwe, Matatu drivers in Nairobi’s traffic jammed roads, boda-boda motorcyclists in Kampala and similar situations in African cities have always wondered if those drivers are from the same mother. This is due to their character which is exactly the same. ‘Informal’ traders and MSMEs also share the same character which makes customers wonder whether they went to the same school.  If formal education systems had a long lasting influence on people’s character, economists who attended the same university and read the same books would have the same character. 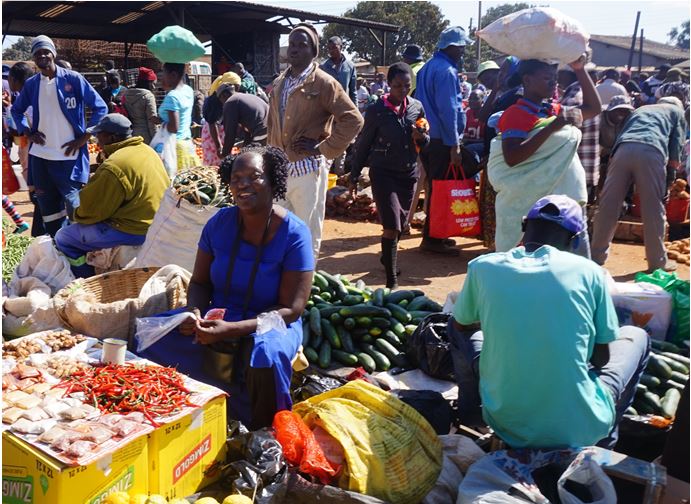 The above examples demonstrate the extent to which fluid and ‘informal’ business ecosystems shape people’s character more than external factors like money or formal education. These markets are able to build the character of farmers, traders, transporters, consumers and other value chain actors in ways that formal training institutions like colleges or universities cannot do. They are an open knowledge sharing institution where various ways of learning include observing, lurking and experimenting. This kind of knowledge acquisition and sharing does not always happen in formal settings. By teaching farmers and traders how they should show up, ‘informal’ markets are able to creatively build and shape the character of economic actors.

In a highly competitive world, character is becoming more important than talent or skill. While skills can easily be acquired, a dynamic character is difficult to acquire. Many farmers and farmer leaders can succeed at producing agricultural commodities but fail to perform in the market. While development agencies, government extension departments and private sector contractors spend money and time trying to develop farmer skills through farming as a business and other approaches, most of these efforts fall short in building the character of farmers and traders. In the ‘informal’ and increasingly digital knowledge economy, the most important thing about leadership is character, followed by talent and skill. This is mainly because informal economies are driven more by trust and relationships than by rules and regulations. Formal institutions like banks which operate based on guidelines and policies need to revisit their business models to embrace trust and relationships as critical pillars of lending.

Relationship between character and entrepreneurship

Evidence from African ‘informal’ economies indicate success in entrepreneurship is now more about character and critical thinking as opposed to talent, strength or skill. If talent was everything, economies with highly talented people would be self-sufficient. We are not saying countries should stop investing in identifying and cultivating talent. Character is becoming central to entrepreneurship.  As part of character building, informal economies compel aspiring and growth-oriented entrepreneurs to seek the highest good of others, speak the truth in ways that are useful to others and lead in ways that meet the needs of other actors and customers. They also obtain expertise in noticing strength in others and show generosity by using their talents to advantage others.  All these attributes are not obtained from formal schools and textbooks but from the business ecosystem. Instead, formal educational institutions promote competition rather than collaboration for the greater good of all.

Modern fast moving economies are about consistency in behavior, supply and participation in the market. To be successful, farmers and traders have to provide predictable signals to market demands. Consumers must know how farmers respond before they do anything. That means farmers have to show up in ways that seek the highest good of consumers and competitors. Character is not about talent or skill but consistency in behavior and predictable responses. A farmer’s character scores over talent in the long-run and helps in building his/her enterprise as a brand to be trusted for planned expansion and growth.

The market and consumers have to be rewarded from time to time with openness and fairness. Character is also easily tied to equity or justice so much that consumers will start associating a predictable farmer’s commodity with a unique, value-added lifestyle.  Through participating in ‘informal’ economic ecosystems, Kombi drivers, Matatu drivers, boda-boda motor cyclists, food vendors, traders and others actors have become aware that things that make them remarkable go beyond talent to the practice of humility and love.

Broadening the notion of formality

The way African ‘informal’ markets are evolving into hybrid economies, signals the need for policy makers and economic actors to broaden the definition of formality from paper work to how businesses and socio-economic ecosystems are structured or organized. Formality should no longer be limited to legal requirements like company registration or tax clearance.  Food ecosystems and MSMEs do not require too much formality as long as traders and other actors produce commodities safely and as fast as consumers need them. Besides, most people’s markets in developing countries are formal in their own ways. Otherwise they would have stopped functioning a long time ago.  They have their own employees, time to open and close, use cash transaction and digital technology. All these practices exemplify formalism.  It should not just be about fixed aboard and certificate of registration that unintentionally end up punishing innovation at the expense of enabling growth.

Financial institutions have to realize that public engagement and financial inclusion is sustained by trust and relationships. Insisting on collateral and enforcing strict repayment processes has less power and sustainable meaning than trust and relationships. In business clusters like SME clusters, the character of the cluster is more significant than the character of individual SMEs. As shown through the case of Kombi drivers and Matatu drivers, for SMEs, the competitive environment and relationships control and influence the character of actors in the market. Everyone policies everyone so that the entire market ecosystem is not tarnished to the point of losing customers.  On the contrary, banks continue to ignore the entire ecosystem preferring to deal with individuals whose actions are apparently influenced by the ecosystem.

Formality should not be a basis for lending because it has nothing to do with a business’s growth pattern or the business owner’s character.  Rarely do the majority of customers inquire about registration in order to buy a commodity. The relationship between enterprises is more powerful than the need for formality. Otherwise shelf companies would be the ones doing more business than self-organized informal actors who focus more on delivering value than satisfying legal business requirements.  We are not advocating for the complete removal of legal processes and identities but the major question is: Which is more important legal identity or capacity to satisfy customers? If registration and legal requirements were more fundamental, consumers would insist on seeing a company registration from every farmer or producer before buying commodities.

Character and propensity of a business to grow should be major determinants in a financial institution’s decisions to extend loans. This will ensure micro and medium scale actors with capacity and room to grow are not denied funding in preference of large corporates who many continue to be prioritized for credit when their growth has reached a ceiling. Compared to formal institutions, in ‘informal’ economies knowledge feels much more alive and social, rather than just coming from a textbook or organizational manual. Traders and farmers benefit immensely from observing collaboration in action. Understanding the entire economic ecosystem can enable financial institutions, development agencies and policy makers to excel at planning, scaling and extending their influence as well as satisfying unmet needs some of which are hidden in plain sight.